This project was archived.

"Chennai is facing one of the wettest monsoons of the century, recording close to 120cm of rainfall this month. Daily life for over 6.7 million people was disrupted and the media called attention to the situation. Unsurprisingly, there is virtually no data available to identify which parts of the city were most affected, and vulnerable to such climate phenomena." Source: Mapbox blog.

Citizens are reporting flooded streets using OSM with flood-map. Lots of streets and waterways are still missing around Chennai and needs to be traced. 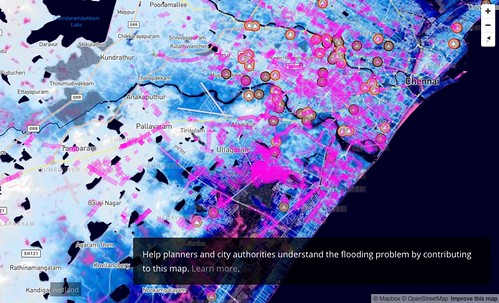 Entities to Map
roads and waterways
Changeset Comment
#chennai-flood http://tasks.openstreetmap.in/project/62 Tracing missing streets and waterways around Chennai city from imagery
When saving your work, please leave the default comment but add what you actually mapped, for example "added buildings and a residential road".

Trace missing roads and waterways from imagery. Use Bing or Mapbox Satellite as imagery sources.

If you are a beginner use iD, but if you would like to use the more advanced editor use JOSM. For help with editing, check these quick mapping guides